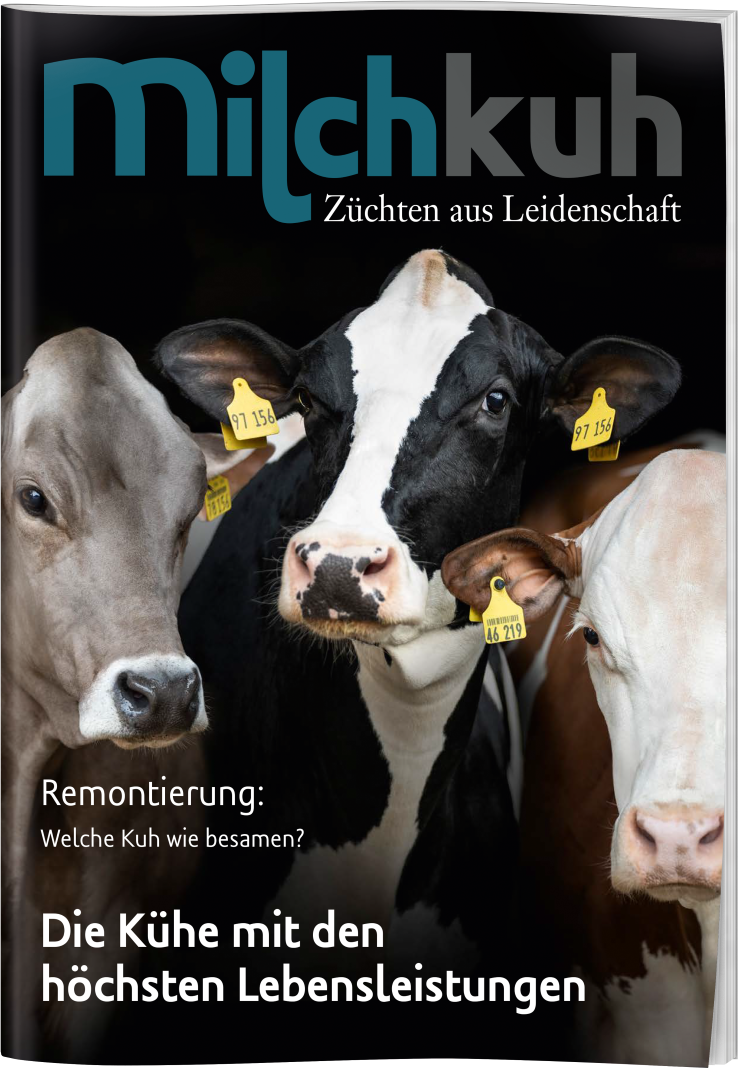 The Landwirtschaftsverlag Münster today launched the magazine „milchkuh - Züchten aus Leidenschaft“. The magazine presents top bulls, current breeding values and special cows. In addition, “milchkuh” analyses the diverse and innovative breeding strategies of successful dairy cow farmers in reports with strong pictures - regardless of cow breed and herd size. “In breeding there is no right and wrong or one strategy,” emphasises milchkuh editor-in-chief Gregor Veauthier. “High-performing and healthy herds are those of breeders who choose the right genetics for their location, farming method and cow breed. We want to inspire dairy farmers with our ideas and stories. If this helps them further their farms, “milchkuh” has fulfilled its task,” Veauthier explains the claim of the new magazine.

In the first issue, the editors visit the Morisse family in Bremen-Rekum, among others. 43 cows of the 240-head herd are classified as excellent, eight animals have more than 100,000 kg of milk in lifetime production. “milchkuh” takes a look behind the barn door of Henning Gläßer from Cobbelsdorf in Saxony-Anhalt. Gläßer introduced genomic typing in his calves back in 2016 and has had great breeding success since then. With a herd average of 11,700 kg, the Brown-Swiss breeding farm Hindelang in Allgäu has been at the top of the rankings for years. “milchkuh“ analyses the recipe for success.

The new magazine is published four times a year on 48 pages. The regular annual subscription price is € 39.80. For the launch of „milchkuh“ there is an attractive introductory offer of € 32.00 for the first year. The first issue is enclosed with „milchrind“ (issue 4/2022).

The magazine „milchrind - Journal für Zucht und Management“, previously published by the Landwirtschaftsverlag Münster in cooperation with the Bundesverband Rind und Schwein (BRS) as publisher and the breeding organisations behind it, will be discontinued at the end of the year after three decades of successful cooperation. „However, nothing will be lost for the breeders. In future, you will find all important Holstein breeding information under „Infos aus BRS und vit“ in the association magazines and on the homepages of the breeding associations,“ Georg Geuecke, Chairman of the Board of the BRS, explains the new communication concept.

„With issue 4/2022 of „milchrind - the magazine for Holstein breeders“, a 30-year success story comes to an end. The Landwirtschaftsverlag Münster would like to thank the BRS and the breeding organisations for the long cooperation based on trust. Milk producers in Germany have benefited from this,” Dr Ludger Schulze Pals, Managing Director of Landwirtschaftsverlag, is convinced. “In particular, we would like to thank the long-standing editorial director Dr Christine Topf for her exemplary commitment. She is the face of “milchrind” and has been responsible for the technical and journalistic aspects of 119 of the total 124 issues. Above all, Christine Topf has always been successful in transferring her lifeblood for Holstein breeding into an excellent trade magazine,” said Schulze Pals.