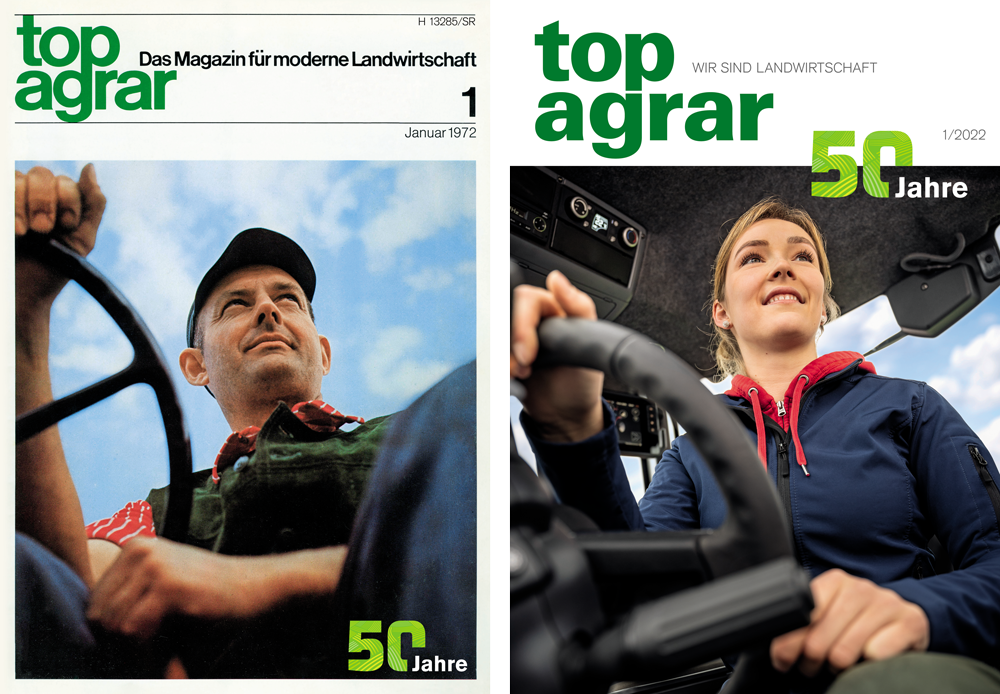 top agrar, the agricultural magazine with the highest circulation and reach in the German-speaking world, published by Landwirtschaftsverlag Münster, recently turned 50. The editors have taken this as an opportunity to refresh the layout of the magazine in the current January issue and to make the content even more useful. For example, the start-up network „f3 - farm.food.future“ is now part of top agrar. The new „Perspectives“ section deals with alternative sources of income, innovations, start-ups and new fields of business. In addition, the magazine is becoming even more regional and offers a home to all farm structures, small and large, full-time and part-time farms.

„In future, we will focus even more on customer proximity and will analyse and discuss current trends in agriculture together with practitioners“, top agrar editors-in-chief Guido Höner and Matthias Schulze Steinmann outline the most important innovations. Readers will find a specially flagged article on this in each issue of the anniversary year.“

The first issue of top agrar appeared in January 1972 and it was radically different from the agricultural weeklies of the time: colourful, richly illustrated and full of practice-oriented reports and easy-to-understand, high-quality and well-researched technical articles. For the first time in Germany there was an agricultural magazine aimed at all farmers. The aim of the editorial team was and still is to be a companion and advisor to farmers' families in all situations and to show them ways into the future. „Nothing has changed in this respect to this day,“ emphasises Guido Höner.

From the very beginning, the departments of farm management, market, arable farming, animal husbandry, agricultural technology and family have been the indispensable hard core of top agrar. And the more agriculture became the focus of politics and society, the more political the magazine became. „Reports, analyses, critical comments and also going where it hurts and where you don't just get applause are part of the magazine's source code. That's how we measure ourselves,“ explains Matthias Schulze Steinmann.

This is well received by the target group. Shortly after reunification, well over 120,000 farmers read the „Bildzeitung der Bauern“. Although the number of farms has more than halved since then, the current print run is still just under 100,000 copies. And at least as important in the meantime is the comprehensive digital offering with daily fresh market reports, daily newsletters and breaking news, which will be expanded even further this year. Added to this are specialist seminars and high-quality political event formats such as „Agriculture in Dialogue“, where political hot topics are discussed with ministers, MPs, scientists and practitioners in Berlin.

„Being 50 years old is not yet a merit,“ the top agrar editors-in-chief agree, „but the fact that we have now been at the side of farmers for half a century and that so many farmers have remained loyal to us is something we are already proud of!“

„top agrar is one of the flagships of Landwirtschaftsverlag and at the same time the motor for the innovative further development of the company,“ says Managing Director Dr Ludger Schulze Pals, describing the importance of the paper.

„The ideas for other successful trade publications, such as the agricultural technology magazine profi and the cattle title Elite or the successful public magazine Landlust, were created and launched in the editorial department.“

In the anniversary year there will be many reader promotions and an anniversary special issue in August. „There we will offer our readers and our advertising customers a platform to look back on 50 years of top agrar, but above all the opportunity to look forward. We are looking forward to it. Let us surprise you,“ say Guido Höner and Matthias Schulze Steinmann.